Drekka is primarily the work of Michael Anderson. He has recorded music and experimental projects, under various monikers, since 1986. In 1996, he took up the drekka- moniker for himself as he lost a friend, gained another and and decided to pack up and move from Boston to Chicago.

Eversince, Drekka has toured extensively in Europe as well as the US (with like-minded artists such as Jessica Bailiff, Iditarod, In Gowan Ring, Annelies Monseré, Rivulets, Stone Breath, Vollmar… along with an occasional rotating cast of characters primarily drawn from the Day2 Alliance - a community and collective of artists, labels, musicians and filmmakers.

Q: - What's the most accurate description you've heard of Drekka?
Drekka: - My friend Thax Douglas, a noted poet in Chicago, once told me that he liked to listen to Drekka with the windows open in his small apartment which is right by a busy intersection. He liked how the music changed every time, depending on the time of day & amount of traffic outside. Another person told me at a show that he kept trying to concentrate on the show, but found himself staring at the ceiling thinking about something he hadn't ever thought about before. Both of those are nice descriptions. -- QRD magazine 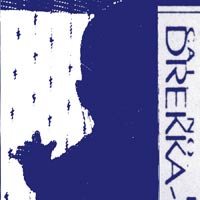 Drekka has been a long-standing record collectors nightmare; a case that is now rectified with this collection of varied and widespread orphans. A hushed, cinematic, ambient, ethereal-folk. at times discordant and menacing, more often communicative and inviting.