The duo of Waldemar Noë and Wim Elzinga debuted in the mid-nineties, out of nowhere, on the legendary Shrimper label. Ever since they’ve been a favorite of many lofifans who appreciate a decent amount of 60s-influenced psychedelic garagepop.

This resulted in strings of shows in Europe and the US, and more records on legendary labels as Sing Eunuchs and Animal World. Morc was lucky enough to release a split tape and split 7” back in the day.

As Simon Joyner, writes in the liner notes of Sister Planet about his first encounter with Bingo Trappers:’ I heard something simultaneously new and old, something familiar but chewed up and put back together wrong. Whatever it was, it was some infectious stuff. I turned it up and jumped around on the couch since no one else was around. Druggy pop songs, harmonies, riffs, choruses and bridges, plus Dylan and Young as gurus meant harmonicas and pedal steel! These guys were some kind of relaxed and knew the gravel backroads into the late 60’s and early 70’s country-damaged songbook by heart.’

After all these years, the cornerstone is still Noe’s authentic 60s guitarstyle and his unique voice, backed by Elzinga, who is one of the most solid rhytm sections on his own, and provides the songs a unique rich sound with his athmospheric slide guitar. 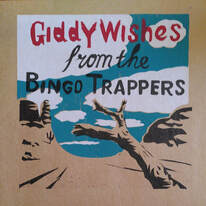 Bingo Trappers,  the prolific Dutch lofi-legends, return with their first album since the sold out elizabethan record. Once again, they prove to be the masters of 60s-influenced psychedelic garagepop, with a touch of dreamy americana blent in. no-one else makes their songs so fluid-sounding an catchy like they do. Giddy Wishes is a treat to hear: like recieving an oldfashioned postcard from a friend you haven't seen in too long. 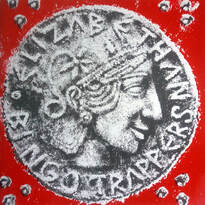 'warehouse find' : two last copies! in case you missed out: your chance to rectify this.