Circle Bros is the project of Wim Lecluyse, the man behind Morc records. The past few years Circle Bros shifted from a pure ambient-esque project to a more song-oriented unit, though most songs are built up around an improvised core.

Circle Bros started late 1997 as a bedroom project. He has released a handful of full length tapes and eps on morc and a few other labels, as well as a split 12" with zent one, a collaboration with karina esp and a bunch of compilation appearances.

however, the output stayed as low/slow as in the circle brothers days. there was one tape-ep on morc, and a collab with old friends karina esp and drekka. these were followed a couple of years later by a 3" on the bluesanct sublabel orphanology, and the lp 'haven' on morc, which was when circle bros found it's 'current' sound

after that, the 'new' circle bros recorded two more albums, for the swiss label three-four, again with a few years in between them. these tracks were also translated into a live setting, which in its turn then influenced the recordings: again more direct and 'impulsve', as can be heard on the split lp with matt christensen. 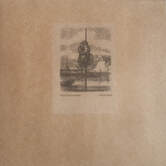 long, improvised songs for patient people. a bit more abstract and guitar-oriented than recent output by these veterans. Circle Bros put together two silent yet fluent tracks about lack of sleep. ​