Félicia Atkinson is a French artist, and after a detour in Brussles, currently living in the Alps. Though she’s been making music for quite a few years, it’s only the past 3 years that her work got some broader attention within the underground. her sound is characterized by intriguingly built up drones, repetitive quitar and keyboard parts and soft vocals

Her work, both released under her own name and as Je Suis Le Petit Chevalier appeared on a string of releases on labels as Digitalis, Unread, Spekk, Shelter Press, No Kings, Hibernate, Home Normal or Aguirre

As a visual artist, Atkinson showed her artworks and musical performances in different places such as MCA of Chicago, Synchronicty in Los Angeles, an old buddhist temple near Hiroshima or Palais de Tokyo in Paris. 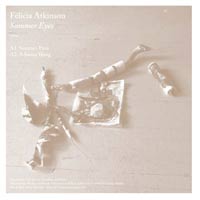 Summer Eyes is a bit lighter than Felicia’s most recent output. The first track starts out with a very recognizable keyboard melody, but slowly turns into a powerful yet friendly sounding drone, with all the elements from the very start still recognizable in there. The second song is an instrumental –to her standards- popsong.