After Robert Lowe‘s band 90 Day Men went on hiatus in 2004, het decided to focus his solo-projects. Apart from releasing a few albums under his own name, his work under the moniker Lichens is probably best known.

Under this name, he make a mix of focused and sparse drones using guitars, synths and his unique voice. His most notable releases have been two critically acclaimed albums on the Kranky label.

that these didn’t go by unnoticed resulted in a long list of artists collaborating with Lowe. A small selection: TV on the Radio, Twilight, Russian Circles, White/Light and most notable Om, which he joins live and on their two most recent albums, making the band sound a lot richer. 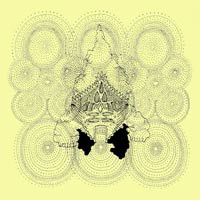 More than on any other Lichens release, on Lítiõ Fólk Lowe focuses on his distinct voice. For the most part of the album, you’ll hear nothing but his wordless vocals – some parts melodic, some droning, some pulsating, but at all times enchanting.