The Iditarod was a pioneering group in what was soon to be dubbed not ‘weird folk’, but the more loaded term ‘freak folk’. Their handmade music drew from traditional folk song, 1960s psychedelia, and DIY culture. Yet The Iditarod gained very little attention in their lifespan, and their influence is still not properly acknowledged. it is certainly not because The Iditarod’s music is any less affecting or interesting then those who followed in their wake. Most probably it is because the timing was totally, miserably, off-beam.

The band started out in the mid-nineties, and disbanded in the early 2000's, just when the genre started booming. Carin’s output has been limited to a few guest appearances with Stone Breath, whereas Jeffrey toured extensively with Black forest/Black Sea, Manbeard and Jackie-o-motherfucker
Their legacy? Two full length cds (available on Bluesanct), the collage ‘Kleine’ (on morc)  and some of their very best work spread out over a few short run cdrs, a couple of 7"s and a lot of compilation tracks, of which many can be found on the album 'Foxfur and rarebits'.

The new psychedelic folk scene which The Iditarod had helped shape would go on without them, becoming ‘freak folk’, drawing in new fans and expanding at a rapid rate. It took from Carin and Jeffrey’s influence, but it seldom explicitly gave them credit. 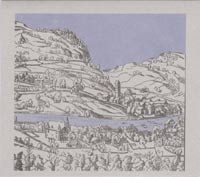 legendary folkcombo, feat members of black forest black sea, in gowan ring, fern knight... re-release of their tape from 2002 on morc. a perfect mix of direct songs with psychedelic tape and drone experiments.